July’s residential resale market performance was record breaking. Almost 11,100 properties were reported sold, a 28 percent increase compared to the 8,679 properties sold a month earlier. Compared to July 2019, sales improved by almost 30 percent. There were 8,555 residential properties reported sold last year. July’s numbers are the clearest indication as to the robustness and resilience of the Toronto marketplace, especially when fueled by record-low mortgage interest rates. 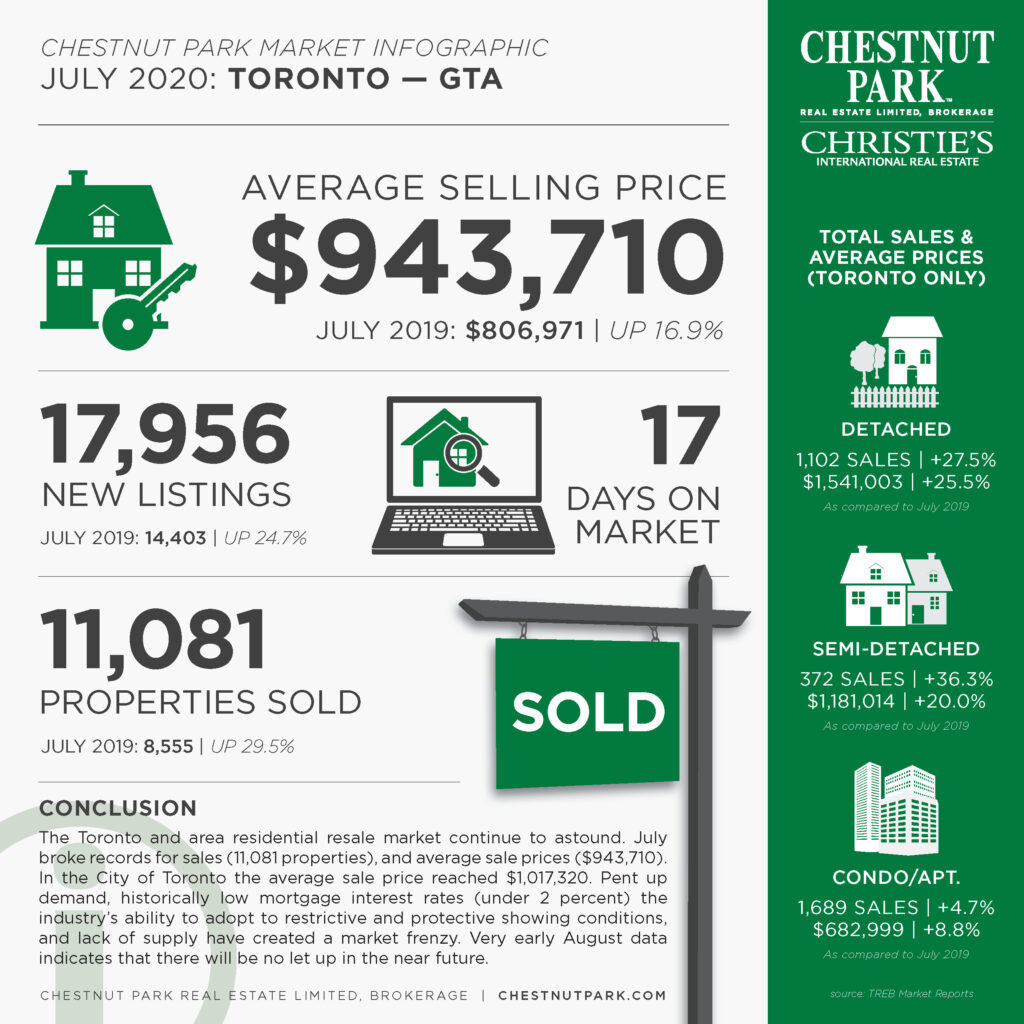 In the City of Toronto, the average sale price is even higher. It came in at $1,017,320. This number is particularly impressive when it is remembered that it includes 1,689 condominium apartment sales out of a total of 3,577 properties reported sold.

It is also worth noting that the higher-end of the marketplace exploded in July. In July 452 properties having a sale price of $2 million or more were sold. By comparison, only 185 properties in this category were reported sold last year, an eye-popping increase of 144 percent. No doubt the resurgence of the equity markets has bolstered the confidence of purchasers of higher-priced properties.

The entire residential market has not reacted to the pandemic and its impact on the local economy equally. Condominium apartment sales were negatively impacted during the second quarter of 2020. The quarter saw the tightest economic restrictions and the resulting economic fallout. During the second quarter (ending June 30th), condominium apartment sales were down by over 50 percent, and new listings over the same period were down by almost 22 percent. Notwithstanding these very negative numbers, the average sale price increased by 5.1 percent to $619,707.

In July there was evidence that the condominium apartment market was making a recovery from its poor second quarter performance. In July sales modestly rose by 4.7 percent compared to last year. Sale prices were more robust, rising by almost 9 percent to $682,999 in the greater Toronto area. In the City of Toronto’s central core, the average sale price was a stunning $746,204.

The rental market was also negatively impacted by the pandemic in the second quarter. A combination of restrictions on showing condominium apartment units for rent and job losses across a multitude of economic sectors dampened demand for rental accommodation. As a result, condominium apartment rentals in the second quarter were down by 25 percent compared to the second quarter of 2019, where the number of available condominium apartments increased by 42 percent to 21,703. Not surprisingly, average rents have declined across the board from bachelor to three-bedroom apartments. Except for bachelor apartments, rents declined, on average, by 5.5 percent from a year ago. Bachelor apartment rents, understandably, declined by almost 10 percent. Increased choice has allowed tenants to negotiate rents downwards, a reversal of years of constantly rising rent levels.

Early August results indicate that the resale market will produce strong numbers once again, although not quite as robust as July. On a year over year basis sales will be approximately 10 percent higher than August of last year. It cannot be over emphasized that mortgage interest rates of less than 2 percent will continue to drive the Toronto and area resale market, even in the face of the negative economic impact of the pandemic. Those rates are not expected to rise for some time, perhaps as late as the end of 2021.