The residential resale market recovered dramatically from the lows experienced in April. In April only 2,975 properties were reported sold for the entire greater Toronto area. A typical April market would produce 9,000 plus sales. April’s decline compared to April 2019 was a shocking 67 percent.

In May the resale market demonstrated its resiliency, both as to average sale price, and recorded sales. In May 4,606 residential properties were reported sold. This represents a 55 percent improvement compared to April’s results. Although the improvement was dramatic, May’s results were 50 percent less than a typical May. Last year Toronto and area realtors reported 9,950 residential resales. 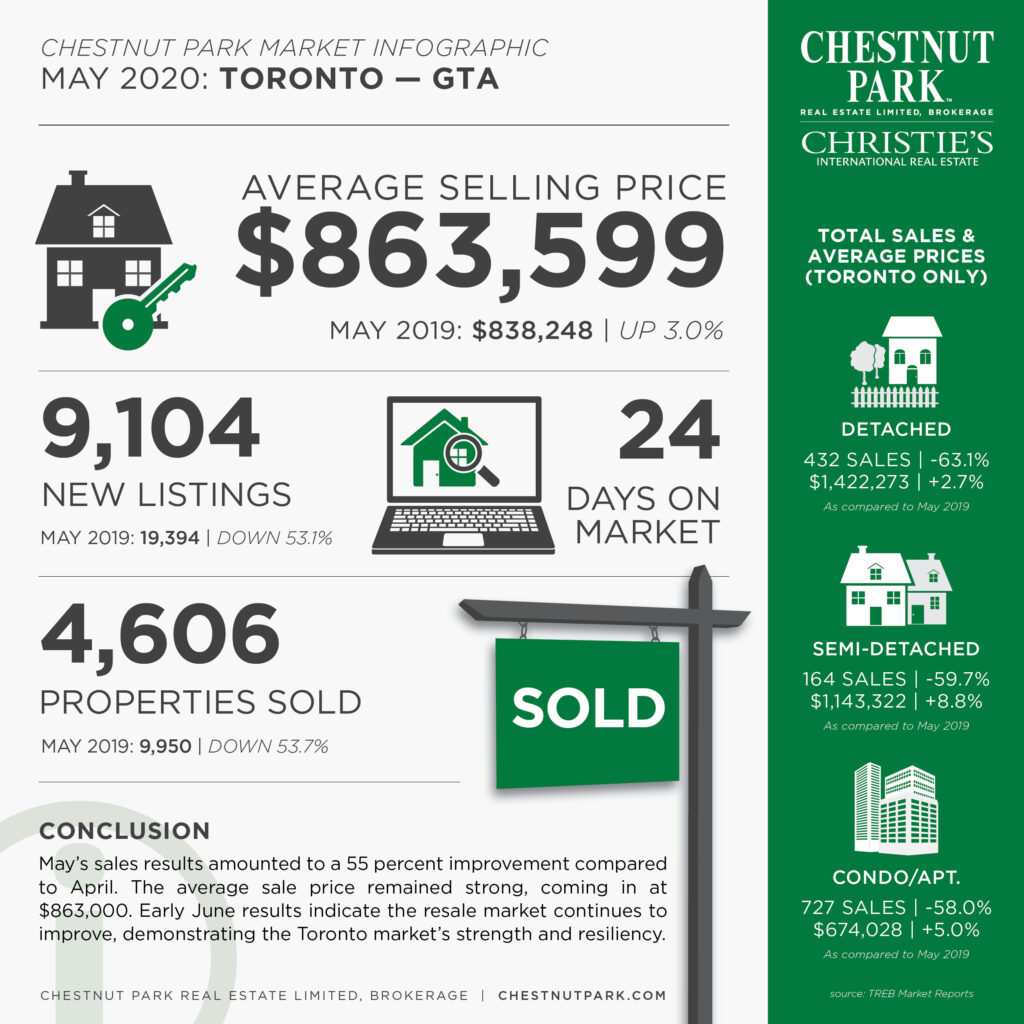 During the month of May the residential resale community adapted to the new in-person showing protocols – wearing masks, gloves, using hand sanitizers, and restricting the number of people during showings. In addition, realtors are now using various virtual viewing platforms that allow buyers to familiarize themselves with properties without viewing them in-person. Public and agent open houses were banned shortly after the implementation of the provincial emergency measures.

What was a problem even prior to the implementation of the emergency measures in March, has been accentuated in April and May: namely, a lack of supply. Last year there were 20,017 properties available for buyers to inspect and purchase. This May the available supply has dwindled to only 11,448 properties, a 42 percent decline. In April there were only a little more than 10,000 available Toronto and area properties for buyers. In a healthy, balanced market there should be no fewer than 25,000 properties in inventory. The lack of supply is, of course, responsible for the strong resale prices. New listings coming to market were down by over 53 percent in May.

Not all sectors of the market place were performing equally in May. In particular the higher end of the market was sluggish. Higher end property sales are not driven by necessity to the degree that lower priced properties are, and given the collapse of the equity markets (now recovering), only a handful of the reported sales were in this category. Last May 292 properties having a sale price of $2 Million or more were reported sold. This year only 132 properties in this price point were sold, a decline of 55 percent. In April only 67 properties sold in this category.

It is interesting to examine very early numbers for June, particularly in the City of Toronto. In May, on average, 50 properties were reported sold on a daily basis. In the first 4 days of June, the number of properties reported sold on daily basis has increased to 93. If this pace continues we could see close to 3,000 reported sales in June for the City of Toronto, not dissimilar to the historic averages for June.

June’s early numbers clearly indicate that the resale market has been incrementally improving, almost on a daily basis since early April. As the emergency measures are relaxed, and more businesses are allowed to open up, resulting in people returning to work, these incremental measures in the number of sales and average sale prices are likely to increase, particularly if more inventory makes its way to the market.