For the second month, the Toronto and area market place produced double-digit increases compared to the same month last year. In May 9,989 residential properties were reported sold in the greater Toronto area, a stunning 19 percent increase compared to the 8,402 that sold in 2018. The recovery of the Toronto housing market is due to a number of factors.  The mortgage stress testing rules introduced in January 2018 appear to have been absorbed by buyers. More resale properties have come to market, although still not enough to create a balanced market.  And lastly, interest rates have edged downward, softening the impact of the new mortgage stress testing.

The increase in the average sale price was driven by an increase in the number of expensive homes that sold in May. This month 293 properties having a sale price of $2 Million or more were reported sold. That compares favourably with the 243 that were sold in 2018, a 20 percent increase. Over the past two years, higher-end sales have been relatively dormant.

In May 19,386 new property listings came to market, an almost identical number to the 19,237 that came to market last year. Unfortunately, the new listings that came to market were insufficient to effectively increase the supply. At the end of May, there were 20,017 properties available to buyers in the greater Toronto area, almost 5 percent less than were available at the same time last year. As the resale market moved into June there were 2.5 months of inventory in the 905 and only 2 months of inventory in the City of Toronto.

Not only did more properties sell in May with rising prices, but all sales took place at lightning speed.  All properties sold (on average) in only 19 days.  Depending on the type of property and location, the speed of sales was even faster.  For example, semi-detached properties in Toronto’s central core sold in only 14 days.  In Toronto’s eastern districts they sold in only 10 days, at 106 and 109 percent over the asking price, respectively. Generally, it took much longer for properties to sell in the 905 region, ranging from 25 days in the Halton region to 36 days in Simcoe County. Sale in the York region took 27 days.

Looking ahead to June we can anticipate that sales will probably decline from May’s torrid pace to a more moderate 9000 sales, with the average sale price increasing moderately by about 3 percent.  Price increases in this modest range are exactly what the Toronto resale market needs in order to remain sustainable.

April’s housing market results clearly demonstrated that the Toronto and area resale market is strong and robust. As indicated in previous monthly reports, any sluggish behaviour by the resale market was due to a lack of inventory, and not to a decline in buyer demand.

In April, for the first time in several months, the number of new listings coming to market exceeded expectations. No doubt improved weather conditions were a major factor. In April 2017, 205 new properties came to market, 8 percent more than the 15,933 that came to market in April last year. For the first time in many months, buyers had a choice that had previously been unavailable to them. Notwithstanding this increase in new listings, by month-end, the total number of active listings available to buyers was only 18, 037 properties, still 1 percent less than the 18,206 available last year. The explanation? Absorption.

April saw Toronto and area realtors posting 9,042 sales, a dramatic 17 percent increase compared to the 7,744 properties that were reported sold last year. It is obvious that buyers were waiting for more properties to become available. They did, however, have to act extremely quickly.

In April all properties sold (on average) in only 19 days, an astounding number when it is considered that this number represents the sale of all properties in the greater Toronto area, including condominium apartments. In some neighbourhoods, the pace of sales was even faster. For example, all semi-detached properties in the neighbourhoods of Riverdale, Leslieville and the Beaches sold in only 8 days, a pace not seen since the frenzied period leading up to April 2017. In fact, all semi-detached properties throughout the entire 416 area of Toronto sold in only 10 days, and for average sale prices of 107 percent over asking.

In April we saw some improvement in the number of higher-end sales. April saw 250 reported sales having a sale price of $2 Million or more. This compares favourably with the 233 that were reported sold last year, a 7 percent increase. These numbers were one of the first increases recorded in this price-point in some time. Although most of these sales were represented by detached properties, it is worth noting that almost 10 percent of the sales reported in this price-point were condominium apartments. Only 8 of these $2 Million or more reported sales were semi-detached properties.

The looming concern in all this good news is affordability. It is exciting and invigorating to see how resilient the greater Toronto area resale housing market is, however with average sale prices approaching $1 Million in Toronto and $820,000 in the 905 regions, buying a property in the greater Toronto area may soon be beyond the reach of most first-time buyers. 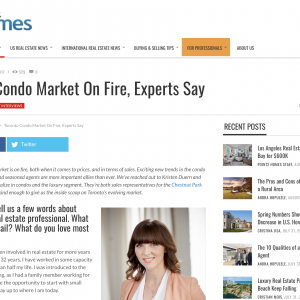 The Toronto real estate market is on fire, both when it comes to prices, and in terms of sales. Exciting new trends in the condo segment are shaping up, and seasoned agents are more important allies than ever. We’ve reached out to Kristen Duern and Dylan Donovan, who specialize in condos and the luxury segment. They’re both sales representatives for the Chestnut Park Brokerage, and they were kind enough to give us the inside scoop on Toronto’s evolving market.

Kristen Duen offers insight on the luxury condo segment of the Toronto market.

Point2 Homes: Tell us a few words about your role as a real estate professional. What does your job entail? What do you love most about your job?

Kristen Duern: I have been involved in real estate for more years of my life than not. In my 32 years, I have worked in some capacity in real estate for more than half my life. I was introduced to the industry when I was young, as I had a family member working for a developer. That gave me the opportunity to start with small jobs. I have worked my way up to where I am today.

My focus over the last 10 years has been on the luxury condominium sphere, where I have successfully managed and sold one of the most prestigious hotel-condominium buildings in Toronto, the Shangri-La.

I am so fortunate to have had the opportunity to meet many incredible clients from all over the world. I have gained a breadth of knowledge and experience to understand each step of new development, international business dealings, and the intricate workings of the Toronto real estate market.

P2H: Have you spotted any interesting market trends recently in Toronto?

K.D.: We are in a very vibrant market, which is changing by the day. Each sale in Toronto is setting a new bar. With the lack of inventory of homes in the city, we are witnessing the condominium market rival houses. It used to be rare to see multiple offers on condominiums, now it is a common occurrence.

In the luxury marketplace, we are seeing larger high-end condominiums selling faster and for higher prices as well. The lack of inventory of large homes is pushing buyers to consider condominium living; however, their lifestyle requires large Two-Bedroom-plus-Den or Three-Bedroom suites.

There are not many buildings in Toronto which cater to these buyers, as most consist of small units, with inadequate room sizes. Buildings such as the Shangri-La, the Ritz Carlton, and the Four Seasons are some of the only choices which provide spacious suites, assisting in an easier transition from a home.

As part of the Chestnut Park team, Dylan Donovan has a front-row perspective on Toronto market trends.

P2H: Did you notice a preference for buying in the suburbs, and if so, what are the reasons for that?

Dylan Donovan: A fair amount of the clients we work with are migrating from the suburbs to the downtown core. After many years living in the suburbs, they are switching their priorities to be more lifestyle orientated.

Living downtown allows more opportunity to enjoy a wider variety of entertainment and cultural offerings. Being closer to the ballet, opera, theatres, sporting venues and restaurants has become a big component of why we have people moving downtown.

P2H: Are your clients interested in buying homes that need restoration, or do they prefer buying renovated homes?

K.D.: Typically, clients purchasing at the top end of the market are looking to find something turn-key and move-in ready. They would rather spend more on a property in which they can visualize moving right in, instead of having to worry about the added time and worry of designing and renovating. Many of our clients walk into a property and want to purchase it as is, including all the furniture, art and accessories.

P2H: Did you notice a rising interest in any property type in particular?

D.D.: One of the biggest demands we have now is for larger condos that offer a comparable amount of space to living in a house, but without all the maintenance and hassle that comes with a single-family home.

Our clients who are downsizing to a condo are focused on prioritizing an increased lifestyle standard, but are used to a certain amount of space, which can be tough to find in many buildings throughout the city.

P2H: Renting or buying? How can your clients decide what’s the better option for them?

For clients coming from a house, it can be daunting moving into a smaller condo, but more often than not we find they overestimate the amount of square footage they need. Living in a downtown condo is more focused on lifestyle, as opposed to individual space, and people spend more time outside of the property than they might in a suburban house.